This document describes the design considerations and implementation details for the power stack interface subsystem on the Advanced Motor Drive Controller (AMDC).

The power stack interface was designed with the following requirements:

The full power stack interface block diagram is shown above. It is compacted into 8x duplicated channels for easy representation. The connectors and jumpers depicted outside of the blue box are not replicated on the PCB.

Each DB-15 connector is designed to control a single three-phase two-level inverter. This includes six PWM signals and four status signals. The user can configure the voltage for both the status and PWM signals independently. The user can also supply each inverter with a power supply designed to run the gate drivers that is distributed through the AMDC; this reduces wire routing overall. Finally, all PWM outputs are only enabled when the E-STOP input is disabled. If the E-STOP input becomes open-circuit, all PWM signals go to a low state, thus turning off all switches. 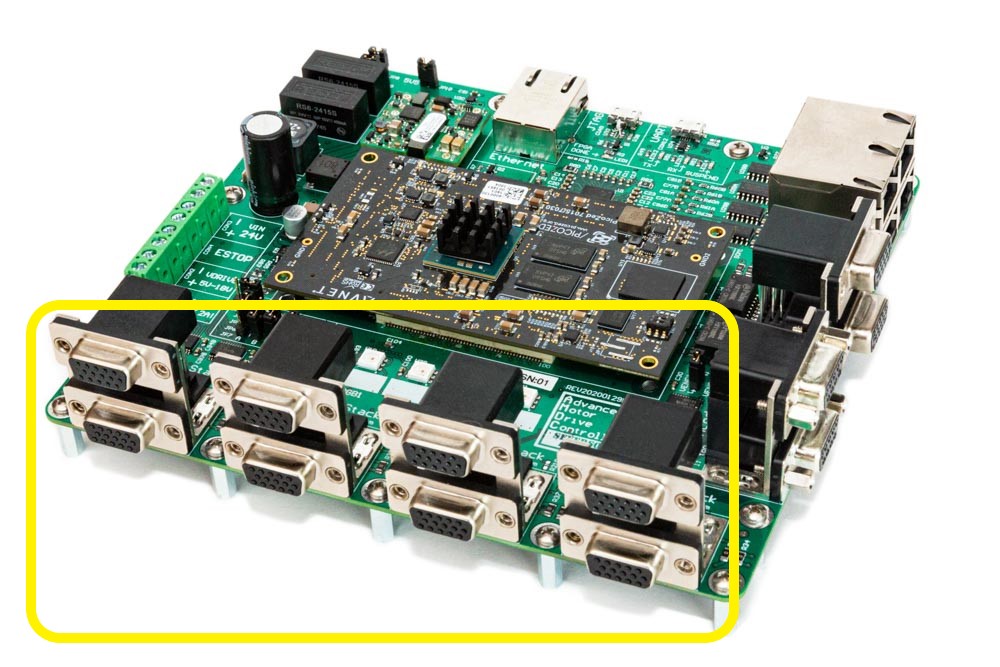 The PWM gate drive signals are generated by the PicoZed FPGA at 1.8V. These are then level-shifted up to the user-supplied VDRIVE voltage. Each PWM signal then goes to the DB-15 connector. Each PWM signal is ANDed with the E-STOP signal. Thus, when the E-STOP is opened, the PWM signals go to a logic low state.

Each inverter has four status lines (labeled A, B, C, and D). These signals operate at the VDD voltage level, which is configurable by the jumper on the PCB. Each status line (A/B/C/D) can be configured as either an input or output, depending on the jumper selection. Note that all eight inverters use the same directionality for the status signals (i.e. if status signal A is an input, it is an input for all eight inverters).

On the AMDC, the following are the jumpers used to set status line voltage level and direction:

There are three voltage rails which must be understood for the power stack interface: VDD, VDRIVE, and VPS.

The AMDC as a whole has various voltage rails which are outlined in the Power Distribution document. However, the power stack interface subsystem adds two extra voltage rails to the mix: VDRIVE and VPS. These are user-supplied via external inputs. The power stack VDD rail is jumpered to either the main 5V or 3.3V rail.

This voltage rail (the “power stack voltage rail”) is completely independent from the AMDC; the AMDC simply acts as a power distribution network for this rail. On the AMDC, one screw terminal input is used to supply both the + and - rail of VPS. Then, the AMDC routing distributes this power rail to each DB-15 connector. This power rail is designed to supply the bulk power required by the power stack gate drivers. Usually, 12V or 24V is used for this. Note that the AMDC trace routing for this signal can only support 2A. At 24V, this would mean 48W power consumption for all power stack gate drives (or 6W each). If the user needs a more powerful gate drive, they must use an external power source for it.

This voltage rail (the “power stack PWM drive voltage”) is supplied via the AMDC screw terminal input. This sets the voltage level used for the PWM signals that go to the power stacks. The user must supply a valid voltage at this input for the PWM outputs to function (5V to 18V). The PWM voltages will then be square waves which go between 0V (the AMDC GND) and the user-supplied VDRIVE. Note that this signal is NOT intended to directly drive the power electronic switch gates in the power stack; this signal controls the gate drive circuitry on the power stack. For high noise immunity, use larger VDRIVE voltages. Nominally, 5V is fine if proper shielding is used to block EMI.

VDD is supplied by the internal 5V or 3.3V rail on the AMDC. This rail is typically not used as power for dynamic switching, since it is the I/O voltage level for the status lines. The status signals are typically DC values. Therefore, the power drawn from the internal AMDC rails is negligible compared to their capability.

Each DB-15 connector uses the same pinout, but for its own inverter. For example, the top DB-15 of CON10A supplies the PWM and status signals for inverter #1, while the bottom DB-15 of CON10D is mapped to inverter #8.

Each DB-15 connector has three rows of pins (uses the high-density DB-15 format). The connector has tiny labels next to each pin hole which map to the schematic labeling. The following table indicates the pinout for each connector:

To view the mapping between the AMDC schematic labels, PicoZed pins, and Zynq-7000 balls used in Vivado, take a look at the Power Stack section of the pin mapping document.

The following explains the PWM signal mappings between embedded system layers (i.e. PCB connectors, schematics, FPGA, and C code). This section describes what is implemented in the default firmware. Note that the user can change the firmware which will invalidate the following discussion.

To map the schematic signal labeling (e.g. INV1_PWM1) to the firmware drivers, a simple scheme is used: the PWM outputs are implemented as independent half-bridge legs in firmware. Each half-bridge consumes two PWM signals (for the high and low switches), so a total of 24 half-bridges can be realized. The user sets the duty ratio command for the half-bridge as a whole, and the FPGA creates the gate signals for the two corresponding PWM outputs (including configurable dead-time). The mapping between half-bridges and PWM signals is as follows:

In firmware, the above sequences tend to be 0 indexed. For example, in C code, to set a half-bridge duty ratio, the user would call the following C driver function:

Putting this all together, to control a three-phase inverter from C code, the user simply updates the desired duty ratio for three half-bridge legs. For example, to modulate sinusoidal voltages on inverter #1, the following C code can be used:

The PCB layout is important for the high-speed digital PWM signals. The 48x PWM signals are spaced out on the PCB such that there is reduced capacitive coupling between them during signal switching edges. The power supply rail traces are thicker than other traces to accommodate the required current rating while minimally heating up the circuit board.